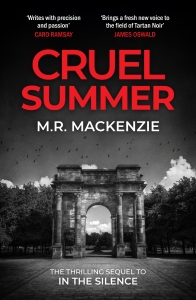 Zoe Callahan is having the summer from hell… and it’s about to get a whole lot worse.

She’s stuck in a dead-end job, her relationship is going nowhere and the memory of the Kelvingrove Park Murders three years ago continues to cast a long shadow over every aspect of her life.

When a prostitute is brutally assaulted by Dominic Ryland, a rising political star with a suspiciously spotless personal reputation, Zoe leaps at the chance to embroil herself in a noble cause and sets out on a one-woman crusade to bring Ryland to justice.

But in doing so, she quickly finds herself on the wrong side of some very dangerous people – people who have reputations to protect and who would think nothing of silencing Zoe by any means necessary.

An explosive thriller set against the backdrop of a sweltering heatwave, Cruel Summer is the sequel to M.R. Mackenzie’s critically acclaimed debut In the Silence and the second instalment in the Kelvingrove Park Trilogy.

5/5 stars – a great follow-up in an up-and-coming series!

I loved the first book in this series, so I was excited when I had the opportunity to review the follow-up which follows the stand-out star of the first book, Zoe, the tough-talking in-your-face Glasgowian, whose life was turned upside down by the events of the first book.

Which reminds me: This book contains spoilers for “In the Silence.” If you haven’t read the first book yet, I would recommend that. But technically, this’s book could be read as a standalone, if you don’t mind spoilers.

I greatly enjoyed this book and highly recommend it to fans of thrillers and suspenseful reads!

OK, so this book showcases Zoe, and also her relationship with Carol. I really liked Zoe from the first book, so I was excited to get to know her better. And this book did not disappoint. Zoe has both a large personality, but also a bit of a need for reassurance, which is great because it makes her character very complex and engaging.

The central mystery was also very good and I enjoyed seeing it play out. There’s a nice social justice element to the storyline and it really makes you think and even a little angry, which is good. I like books that draw on real-life issues and concerns.

I’m interested to see where the story goes from here and will definitely be looking out for the next books in the series. If this book is any indication, it’s only going to get better and better!

M.R. Mackenzie was born and lives in Glasgow, Scotland. He studied at Glasgow University and has an MA in English and a PhD in Film Studies.

In addition to writing, he works as an independent producer and has overseen Blu-ray and DVD releases of films by a number of acclaimed directors, among them Dario Argento, Joe Dante and Seijun Suzuki. In 2016, he contributed a chapter on the Italian giallo film to Cult Cinema: An Arrow Video Companion, and regularly provides video essays and liner notes for new releases of cult films.

Agree? Disagree? Want to add your opinion? Let me know!